New electric vehicles have grown in popularity and represent a vision of the future independent from gas-powered internal combustion engines. The Nissan Leaf is one of the market's lowest-priced and most reliable EVs, which battles on equal footing with supposed luxury sedans. How can the Leaf keep its value and still compete with higher-priced EVs? Check out what sets the Leaf apart from the competition.

Thanks to several consumer report surveys, the newest 2023 Nissan Leaf is currently rated in the top three most reliable electric vehicles. The 214 hp engine has smooth acceleration and performs well in most road conditions. Current ranges of the latest generation 60 kWh battery are upwards of 212 miles on a full charge. The baseline model has a 122-mile range on a 40 kWh battery with a smaller 147 horsepower engine. All new Nissan Leaf EVs come equipped with the NISSAN CONNECT EV capability, which allows owners to check the charge on their vehicle and plan charging times from a smartphone app. Whether you are searching for a daily driver which can handle long road trips or a low-priced starter EV, the Leaf has a trim available to fit your needs. Thanks to improvements in power delivery systems, owners can charge the Leaf from 10%-80% in roughly forty minutes. 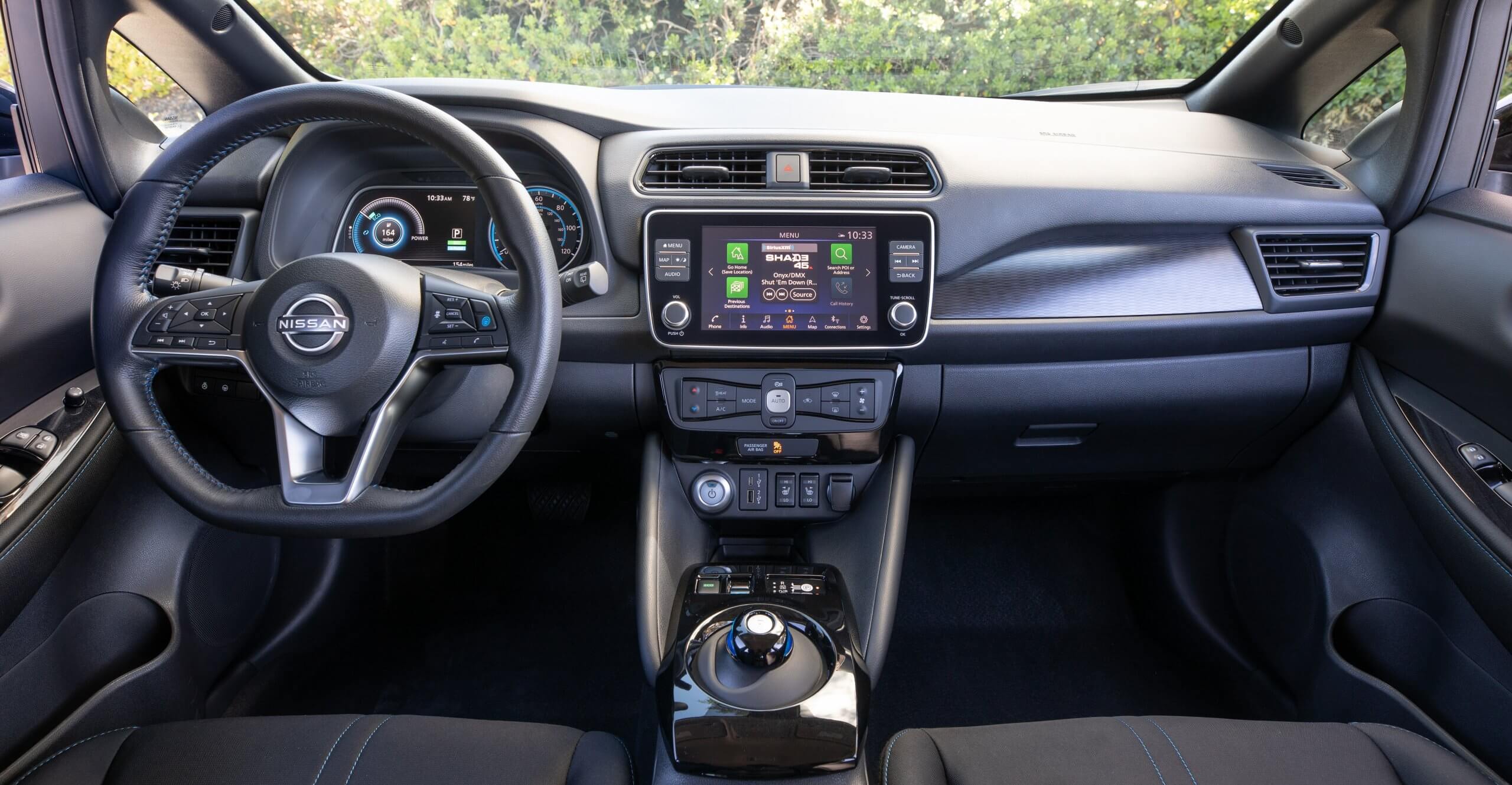 The Nissan Leaf is currently the lowest-priced compact hatchback currently on the market. Baseline models are priced at $28,040 MSRP, with the more powerful Plus trim at $36,040. This price is considerably less than the base Kia Niro and Chevy Bolt, and the Leaf offers much more per value than the $46,000 Tesla Model 3. Additionally, the Nissan Leaf is still available for a federal tax credit rebate, thus lowering the cost by up to $10,000, depending upon approval.

Inside the Nissan Leaf is luxurious but contemporary. The interior is understandably plastic and cloth, thus lowering the price. However, each panel has been designed with a purpose, allowing for a sleek, albeit traditional, interior. Space is decent inside the Leaf, which can seat up to five adults in relative comfort. Cargo space in the trunk measures out at 23.6 cu ft and 30 cu ft when folding down the 60/40 back row. Some of the features of the new Nissan Leaf infotainment and interior are as follows:

Should You Consider The Nissan Leaf?

The Nissan Leaf is objectively one of the best electric vehicles on the market. While it has a slightly shorter range than most other EVs, the Leaf wins on average in all other concerns. Comfortable, luxurious, and fully equipped, the Leaf has it all. Want to try one for yourself? Call or come down to Charlie Clark Nissan to schedule a test drive.

Read More
CATEGORIES »
Nissan LEAF ,
TAGS »
Electric Vehicles , Why The Nissan Leaf Is One Of The BEST EV Cars You Can Buy ,

Electric Vehicles (EVs) represent a radical shift in the personal vehicle market and could replace the Internal Combustion Engine as the car replaced the horse. However, owning an EV does come with some setbacks, as with any new technology, and has yet to be fully adopted or adapted to all forms of use that gasoline-powered vehicles can provide. What are the pros and cons of each vehicle type?

Thanks to their nature of being battery-powered, the EV comes far ahead of traditional vehicles as the lack of internal combustion allows for a more energy-efficient ride. Most ICE cars lose a significant amount of energy through head loss by the nature of the controlled explosion which drives the engine. Regenerative braking and smart E-pedals on newer EVs allow energy to be rerouted to the battery from the heat produced when slowing. Additionally, while EVs may be charged and powered via coal or natural gas plants that service public charging terminals, the emissions from electricity generated by power plants are up to 60% less per vehicle. Owners can increase their emission efficiency by using solar or wind-powered systems at home, although such things come with a high setup cost.

First and foremost, Electric Vehicles often come at a higher initial price than gasoline and diesel-powered vehicles. Due to the nature of EVs being a pioneering technology, their upfront costs can be upwards of 10% more than traditional counterparts. However, this cost does not translate after ownership, as electricity and maintenance per mile are significantly less than purchasing gasoline. Due to the relatively simplistic nature and fewer moving parts of EVs, their maintenance costs can be substantially less than an Internal Combustion Engine. Likewise, new and preowned EVs purchased in the United States have an incredible incentive in the form of a government tax credit, which can save buyers up to $7000.

Regarding range, it is hard to disprove that Internal Combustion Engines have the edge due to the larger potential gas tank range than batteries and the prevalence of gas stations around the nation. Most EVs would require a thorough plan to ensure power charging stations are available along road trip routes. Furthermore, depending on the year of the Electric Vehicle and power station model, it can take anywhere from 40 minutes to several hours to charge an EV, vastly diminishing the daily driving range of the vehicles.

Due to the nature of their battery-powered engine, EVs do not need time to reach maximum torque and thus can get up to 60 mph faster than most ICE cars. Excluding high-performance vehicles, the EV will feel quicker behind the wheel. However, at higher velocities, ICE cars can often reach higher top speeds than their electric competitors.

Ultimately the choice of EV vs. ICE is a close race, with both engine types providing similar overall functions. Yet, due to the growth and advancements in EV technology, it is safe to say that battery-powered vehicles may one day fully replace gasoline engines in most cases.